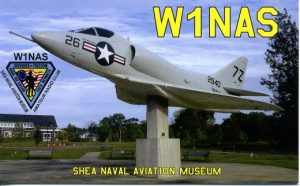 W1NAS had another successful Special Event Station yesterday. Due to the Museum being smack in the center of a major site reconstruction program at the former Naval Air Station, we were fortunate enough to be operating from the K1USN Radio Club in nearby Braintree, MA. We made more than 75 contacts on CW and phone, despite the horrible band conditions. We actually made more phone contacts than CW for a change! Visiting board members from the Shea Naval Aviation Museum stopped by and enjoyed the event and took many pictures.

This was the 59th anniversary of the flight of the blimp Snow Goose from NAS South Weymouth to Resolute Bay, as indicated above. Next year will be the 60th anniversary and we’re already thinking about what we’ll do and how we’ll do it. We’re hoping all the site work will be completed around the Museum and that we’ll be back open to the public once again.  For those wishing a high-quality QSL for yesterday’s event, please send a SASE to Steve, W1OD.