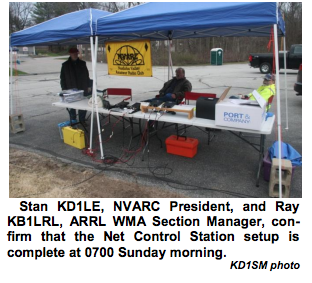 Continuing this year’s pattern of rainy foot races, Sunday April 29 challenged the 27th running of the Groton Road Race with threats of rain. That did not seem to affect participation much, however. Perhaps the runners were basking in the relative warmth compared to Marathon Monday.

The Groton Road Race is hosted by the Squannacook River Runners. NVARC has been providing radio communications for this event since its second year; this is our 26th “run”. The race committee and the Groton Police Department consider Amateur Radio to be a vital component of this event. This year thirty-six Amateur Radio operators turned out to provide the event communications. [Many police departments participate and they don’t all use common frequencies, so we’re the “glue” that holds the race together. Ed.]

A change introduced this year seems to have been met with appreciation. The race committee moved the start times of the 5k and 10k races 90 minutes earlier. According to Race Director Ryan McMeniman this was done to avoid interfering with kids’ afternoon activities. At least one of our radio operators confirmed that as soon as we were secured from race duty he was off to a soccer game. Groton Police Deputy Chief Jim Cullen noted also that as several main roads through town are closed for the race the earlier timing was also a plus.

If you missed us this year, please consider joining the radio team in 2019. We’ve always had a rewarding time regardless of the weather. Mark April 2019 on your calendars. In recent years the Groton Road Race has been on the last Sunday of April. We’ll await word on the exact date of next year’s Race.