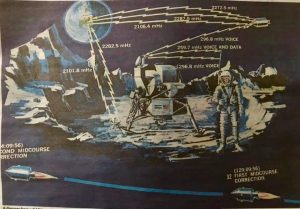 TechNight is tomorrow night, Thursday, October 10, at the usual time and place; 7:00PM at the Grady Research Building in Ayer.  See www.danstechnight.com for details and directions.

We have an unusually interesting program this month, with a rare guest speaker visiting us to discuss the technical aspects of the NASA Apollo spacecraft radio link.  George Whitehead, W1BOF, is one of the few remaining radio engineers who worked on the design of the Apollo mission communications radios. This the radio hardware that did the communications between earth and the spacecraft, including the video of man’s first step onto the moon.

George worked at North American Aviation in Downey, CA from 1962 to 1967. This was the prime contractor for the Apollo Command and Service module. He worked in the Apollo Communications Subsystem Group mainly on the telemetry part of the radio system, the part that sent spacecraft status and astronaut medical information back to mission command. But sitting next to him was the rest of the designers of the radio who did the other parts of the design. He got to know the system quite well.

George will have some technical information for the projector, but it will be a technical discussion between George and I, where I’ll be asking him questions about the system.

And if you miss him here, he will be speaking at the [Nashoba Valley ARC] meeting one week later.

We’ll also talk a little about some progress on the radio.

Hope to see a good crowd for this one.