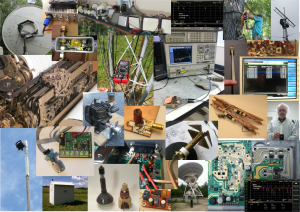 I’ve done a bunch of work on the TechNightRadio, having a new board, and building up most of it. Hopefully by meeting time I’ll have the two signal sources working.

I will also do a summary of the Consumer Electronic Show that I went to last month.

TechNight is held every 2nd Thursday of the month, from 7-10 PM, at the Grady Research Building in Ayer, MA. It is open to anyone with an interest in radio or electronics, from age 6 to 100. Though it is directed mainly at the Ham Radio enthusiast, it also covers general electronics and computers. Amongst the marvels of radio technology like antennas, impedance matching, and software radio, we will discuss things like the Raspberry Pi, Arduino, ARM Cortex and the like, and even a little about LINUX and PC applications that work with radios. Meetings also include a period where anyone can ask questions about anything, or repair and test stuff people bring in. On occasion, the meeting will involve building a kit of some sort, that the participants have agreed to buy as a group. See the Topics page for more details.