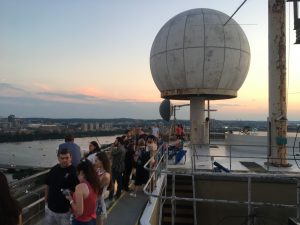 Perched atop the MIT Cecil and Ida Green Building (Building 54), MIT’s tallest academic building, a large, golf ball-like structure protrudes from the roof, holding its own in the iconic MIT campus skyline. This radar dome — or “radome” for short — is a fiberglass shell that encases a large parabolic dish, shielding it from the elements while allowing radio waves to penetrate. First installed in 1966, it was used initially to pioneer weather radar research. As the years passed and technology evolved, the radome eventually fell out of use for this purpose and was subsequently slated for removal as MIT began a major renovation and capital improvement project for the building. That’s when the student-led MIT Radio Society, who had found creative new uses for the radome, sprang into action to save it — and succeeded. [Full story]