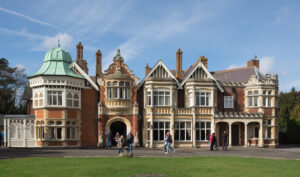 Bletchley Park Zoom presentation for 4/20.  Sign up at FREE:  https://bletchleypark.org.uk/

Below Zoom event is opening day for revealing information, classified until recently, about Bletchley Park global wireless radio encrypted communications.  I spent over 100 hours researching wireless communications during WW2, which is how I found this presentation for tomorrow, 4/20.

Bletchley was hugely successful and never bombed, which shows just how well they maintained secrecy.

The “Y” Stations were equally important. Y is short hand for “wireless” sound being the same.  Some of these stations had 1,000 foot wire antennas, and large arrays.

My misunderstanding that Bletchley employed 90 was smashed two weeks ago upon learning it was near 10,000 and still secret.

The Y Stations used HRO and Hammarlund receivers mostly. I’m looking for more sites showing Y Stations.  The most  interesting knowledge was the evolution of mechanical computers to digital electronic computers prior to 1945 within the walls at Bletchley in 1947 all the hardware and message were destroyed, and Enigma and Colossus machines have been built in the last 10 years.  It appears that the Allies wanted the intelligence destroyed, since every wireless message in the world had been copied.