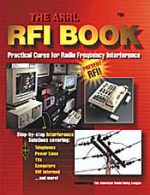 The amateur reported the interference to the FCC in late December. He was experiencing “strong pulse type interference” that appeared to be coming from the northeast of his location in excess of S9 using a directional yagi antenna. Further, he reported that the center frequency tended to drift between 21.2-21.3 MHz; it was on 24 hours a day and it contained a “strong 60 Hz component.” The rise and fall times were reportedly 1-2 millseconds along with a 10 millisecond “slow” ramp.

“ARRL Headquarters, at the request of Riley Hollingsworth at the FCC, asked us to look into this complaint,” reported Goldberg.

“The interference bore a strong resemblance to interference reported in the area in October on 75 meters,” commented ARRL staffer Chuck Skolaut, KØBOG, who is also the International Amateur Radio Union Region 2 Monitoring System Liaison. “At that time, it was suspected as coming from Lowell, MA, but I never received confirmation and the reports stopped.”

Numerous members of the Billerica Amateur Radio Society drove through the ham’s neighborhood searching for the signal, but could not detect it. Finally, the amateur identified the source of the interference.

“It turns out that the culprit is a CMOS based security system that I designed and built 13 years ago. I haven’t nailed down the exact cause but it is from the controller using CMOS ICs,” said the amateur. “I would never have guessed that it was coming from my own house. It’s funny that it popped up after all these years.”

[Ed. Note: You can find general information on the ARRL’s web site on how to identify and combat RF interference and Electromagnetic Interference, at: http://www.arrl.org/tis/info/rfigen.html]