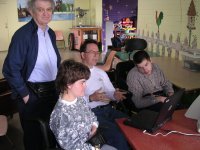 “I was thrilled to have been invited back again as a volunteer,” said Temples. “It’s a way for me to give back to the hobby and to serve others. In the process I feel I’ve made many life-long friends, and I’ve joined a tight-knit community.”

The radio camp draws volunteers, staff and campers from across the United States and Canada. Campers who are blind, who suffer from brain injuries, or diseases that affect their mobility study for their Technician, General and Extra licenses in a safe and supportive class room environment. Morse code mentors work with those who wish to learn or improve upon their code skills.

In addition, the radio camp holds an Operating Skills class for licensed campers who wish to improve their operating skill level. K9HI along with four other volunteer “veteran” hams led the Op Skills class. “The Op Skills class has become increasingly popular. We had nearly 16 participants this year,” said Temples. “In the class we cover a wide number of topics–HF operating, familiarity with station equipment, propagation–even news and current events about Amateur Radio.”

Two popular activities during the week-long camp include the radio direction finding foxhunt and the simulated emergency test. “This year I wrote the script for the emergency test,” remarked Temples. “It involved a simulated mudslide that affected Los Angeles and Ventura Counties. It didn’t take much imagination for everyone to identify with the scenerio, since the immediate area experienced mudslides only weeks earlier.”

The camp established five different simulated “emergency” stations on 2 meters, including a Salvation Army canteen truck, and a Red Cross Shelter. In addition, a real station was set up next door at the Ventura County Fire Department. Well-known ham instructor Gordon West, WB6NOA, was on hand to assist the campers at one operating position. “We introduced a number of realistic scenerios into the script, including intentional interference,” Temples said.