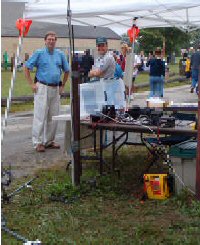 The group set up an “impressive antenna array” consisting of a 40M dipole and verticals for VHF and 17 meters.

According to BARS Newsletter Editor Ken Caruso, WO1N, the crowds consisted of many hams as well as the general public. “What was unusual this year was the number of hams that stopped by and introduced themselves–lots of former BARS members and some new faces, too.”

According to Caruso, always a highlight with the kids was the Morse code sending exhibit. Thirty youngsters earned certificates proclaiming their exposure to and interest in CW by sending their name in code while the hams copied what they sent. “The look of surprise on their faces when we were able to guess their name from what they sent was worth a million bucks!” remarked WO1N.

The Yankee Doodle Day operation made some 40 contacts on the high frequency bands. In addition, NF1A demonstrated VHF packet and internet 802.11b connectivity. BARS plans to mail stylish certificates to stations with whom contacts were made.

“We’re looking for someone with a bit more artistic ability to punch up some of our displays and signs for next year’s [Yankee Doodle Day operation], but we have the process, site location and interest for next year,” adds Caruso.