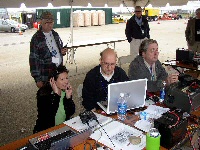 Amateur radio operators, weather enthusiasts, and public safety officials from throughout New England turned out in numbers for the 2007 Hurricane Awareness Tour, hosted by the National Weather Service in Taunton, MA at Quonset State Airport in North Kingstown, RI on April 30, 2007.

The day featured tours by the personnel of the NOAA WP3 Orion Hurricane Hunter aircraft which was open to the public. The Tour marked the start of an annual campaign to raise awareness and preparation for the upcoming hurricane season.