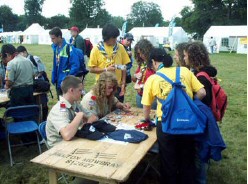 “Echolink was down at the site due to lack of Internet access, start-up problems. [We] did get to do a two-meter simplex connection with the group at the station and an Echolink QSO through the base station connection to a local club repeater link,” reports KB1MTW. Paul also spoke to a father and son who are involved in scouting.

Approximately 40,000 scouts from 200 countries participated in the Jamboree. A contact was made between scouts at GB100J and Clay Anderson, KD5PLA on-board the International Space Station. Another contact was made via Echolink with Whitman ARC member Don Burke, KB1LXH in Taunton.