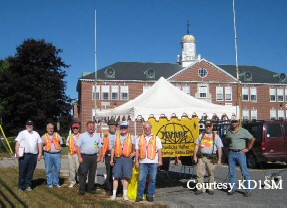 Members of the Nashoba Valley Amateur Radio Club were on hand to assist in the Townsend 275th Anniversary Parade on September 23, 2007. Approximately 250 divisions marched in the parade.

“It was obvious from the activity in the center of Townsend that there were going to be a lot of people,” writes Stan, Pozerski, Jr., KD1LE.

The group set up a Net Control position by 9:30 a.m. at the Spaulding School. NCS utilized an “Ez-Up” shelter provided by N1QIT, tables and chairs from KD1LE, and radios and antennas from the Pepperell and Groton Emergency Management Agencies. Arrangements were made to use the 146.315 Fitchburg repeater in addition to two-meters simplex.

Operators were stationed at four parade staging areas, the start and finish, the Town Common, and two parking areas from which participants and spectators were bused. Also assisting in the operation were members of the Worcester RACES group (WECT).