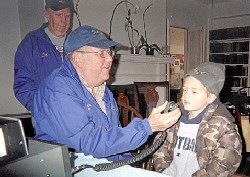 The Whitman Amateur Radio Club has produced a special edition of its newsletter, The Spectrum, highlighting the club’s special event operation from the Plimoth Plantation November 24-25, 2007.

According to WARC President Paul Burbine N1VTI, “There were twenty-six Whitman ARC members and five area hams who helped set up and operate three HF base stations, one Echolink station and two 2-meter base stations, along with portable antennas at the recreation of the 17th century Pilgrim Settlement and Wampanoag Indian Homesite.”

“The weather was great but – with the temperature in the low 30s – the gloves were on.”

The Whitman Times carried an excellent article on the event: Thanksgiving transmitted all around the world.