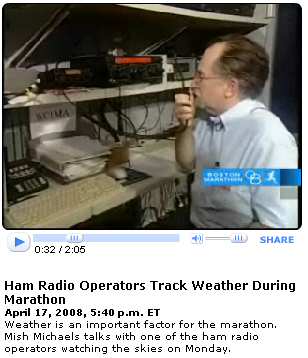 WBZ-TV Channel 4 featured a 2:05 length broadcast story describing ham radio’s involvement in the 2008 BAA Marathon. The video featured Steve Schwarm, W3EVE, one of the ham event organizers. Scharm was shown operating station WC1MA, at the Massachusetts Emergency Management Agency’s Headquarters in Framingham. MEMA Spokesperson Peter Judge was also featured. He described the importance of having ham operators involved in the Marathon, saying that “they provided valuable intel” along the route.