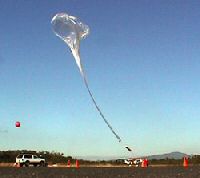 They launched on time in clam clear blue skies from the large ball fields at the Silvia School on Meridian St. in Fall River. The balloon went in excess of 24,000 feet before it was commanded over New Bedford to release the payload, and it drifted to just North of Cuttyhunk Island!

There were several payloads on the balloon made by the kids such as seeds, an egg to see if it could survive the flight and landing, APRS, and a digital video camera to record the entire flight. I have a copy of the video recovered from the balloon and it is awesome!

At one point I was able to identify my house (and N1OCY’s), U-Mass Dartmouth, a high speed ferry boat, and about 2 minutes before the balloon splashed down, for just a moment, you can see what appears to be the recovery boat on the edge of the screen! The balloon landed and was plucked out of the water about 15 minutes later.

With APRS the students were able to direct the recovery boat to be in place where we expected the payload to touch down. The balloon traveled a total of 22 miles.
As well at things went, there were a few lessons learned:

#1.) You can fit 17 middle school students in the front half of the HAMCOW. They were calling me “Kid #18” when I walked in and took a head count. 🙂

#2.) Fall River has some of the coolest kids around! They were great, well behaved, very helpful, and very interested in the balloon and Ham Radio equipment.

#3.) The recovery boat needs a better APRS & 2 Meter setup. HT’s were just too intermittent at those distances from the mainland.

#4.) The APRS payload (not set up by us I must add), needs to beacon out more frequently than every 2 minutes, which is what we were given.

#5.) The payload box carrying the video camera needs to be stabilized to keep the video from jiggling back and forth and wildly twirling in circles. This is easily accomplished with a couple of balsa sticks with what is essentially rudders placed on the ends.

#6.) Launching tennis balls high in the sky with a bunch of kids with my new “Antenna launcher” (a.k.a. – potato gun) is more fun that playing with my dog! I kept the kids busy while we waited for the recovery team to return from the docks.

The Fall River Herald News did ANOTHER front page story on the Kuss kids! (How many is that now? I’ve lost count!!) The BCRA also received an honorable mention in the article, which is fine because were were only helpers. In the article there is a link to a You-Tube video that clearly shows the HAMCOW in the background.

It was also great to see a couple of the Ham Radio kids who are students from past years and are now in High School make the event. Kuss has quite a few current Ham students, and plenty more aspiring to get their license!