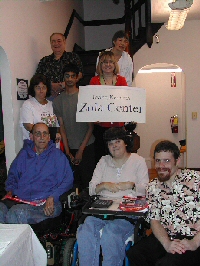 Members of the Boston Amateur Radio Club facilitated a License In A Weekend session at the Irving K. Zola Center for Persons with Disabilities in Newton on June 13-15.

A dozen Zola Center members, with assistance from volunteers of the Boston club studied and reviewed test material from the ARRL license manual. The sessions were conducted on Friday evening, all day Saturday, and Sunday morning. On Sunday afternoon, the Boston ARC Volunteer Examiner team administered the Technician and General class elements.

BARC members held a May prequel meeting to the weekend study session to distribute the materials, and to prepare the students for what lay ahead.

“Everyone helped in some way. Some were on the front lines, but it took everyone else’s support to really make it happen,” wrote BARC Vice President Eric Falkof, K1NUN.

“Paul [N1ZKR] and Nora [KB1OHB] called people to encourage or ensure there were no outstanding problems. This was an essential element, because it maintained the club’s contact with the students. We did not leave them adrift. This helped the students to know they were not being abandoned to their own devices entirely. … We showed we were attentive and cared.”

“The 80 percent passing grade of the participants was a testament to your good work,” wrote Donna Suskawicz, the Center’s Director, complementing the Boston ARC crew on their efforts. “All participants enjoyed the weekend and communicated to me they were thankful for the opportunity to study and take the license exam.” She added, “I know this was time consuming for all of you and I am appreciative of the personal dedication from each of you.”

Suskawicz also participated in the course; she successfully passed the Technician exam and is awaiting her license.

Costs for the weekend program were partially offset by the Avon Products company, who awarded Suskawicz a national “Avon Hello Tomorrow” grant to encourage women with disabilities to pursue ham radio.

The Irving K. Zola Center for Persons with Disabilities at Brigham House is a drop-in community center for persons with disabilities. The center is named for Irving Kenneth Zola, a resident of Newton, MA, who was an internationally known sociologist and advocate who specialized in disability studies and medical sociology.