The Genesis Amateur Radio Society made some impressive inroads in the publicity department from last weekend’s annual Field Day exercise. The club operated from their usual location at the Plymouth Airport in the 3A category. In addition, they operated a GOTA (“Get On The Air”) station for beginners.

“We had media publicity before and during [Field Day] and we are waiting for [one more] after the event,” reports GARS President John Williams, KB1EVY.

“A couple of weeks before Field Day, we were invited to meet with a reporter from the Plymouth Colonial. The story was published in print and also on their web site.” 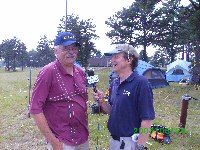