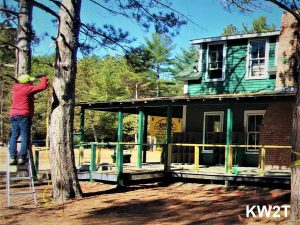 A 130-foot long wire and a vertical were erected for HF contacts, thanks to the efforts of AB1WQ, K1BG, and K1NKR. Bruce, K1BG, along with Phil, W1PJE, and George, KB1HFT, showed the Scouts several facets of Amateur Radio. Bruce, K1BG, made numerous contacts and allowed the scouts to talk with people thousands of miles away.

Phil, W1PJE, brought “a very cool demonstration of the capabilities of an RTL-SDR dongle combined with a simple Raspberry-Pi and software setup.” Using his rig, Phil showed an application that decodes telemetry data sent by all aircraft, and displays the data on a map: flight number, heading, airspeed, etc . Another dongle application tuned the RF spectrum. Phil explained that by using such a setup “one can easily become a shortwave listener without being licensed.”

Stan, KD1LE, coordinated a series of fox hunts using NVARC FoxFinder™ rigs.  “Using a small patch of woods on the edge of the field, I put the fox out in three different spots during the day as the Scouts moved through the events. They came by in groups of three or four. I started by giving some examples of applications for radio direction finding. Then I had them draw a sketch of the area using some landmarks such as buildings, the path, the lake, and some others that I provided (plastic buckets). Then we worked our way around the area with the Scouts taking bearings using a FoxFinder and plotting them on the sketch.” Stan led a total of eight groups in direction finding for the fox.

Dennis, K1LGQ, contributed his Xiegu G90 QRP radio, an all band 160-10 XVCR with AM, SSB, and CW. It was powered using a 35amp gel-cell battery. “Conditions were not in my favor and I was competing with kilowatt stations on 40-meter phone. The antenna is a home brew vertical with spare parts from everywhere,” reports Dennis.

Far fewer Scouts turned out for the Camporee than were expected. However, those that did show up had a full day of Scout activities expertly managed by Rob Kosman of Pepperell Troop 13.  One 17-year-old who had seen the radio demonstrations was overheard saying, “Dad, this is cool stuff; let’s find out more about it.”

The NVARC members plan to follow up with the Scouts to “both assist any that are interested in delving deeper, and to demonstrate to ourselves that our participation is having the desired result.” 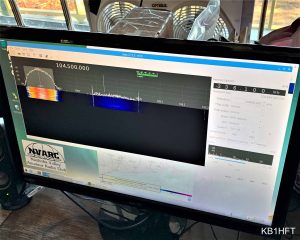 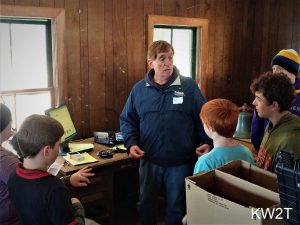