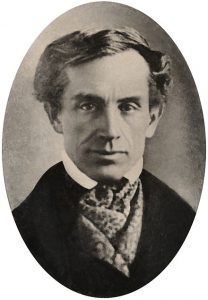 On this date in 1840, Samuel Morse received a patent for his “Morse code” system. Morse was a painter, originally. He also studied photography with Louis Daguerre in France, and brought the new technology to America, where he opened a photographic studio in New York City. He became interested in telegraphy after he failed in his bid to become the mayor of New York. During a demonstration of one of his early telegraph machines, he met Alfred Vail, a young mechanical engineer. Vail was fascinated by the telegraph, and he convinced Morse to bring him aboard as an assistant. Vail helped Morse work out some problems with Morse’s original system, and it didn’t hurt that Vail’s father was a wealthy industrialist. Vail put up the money to pay the patent application fees in exchange for a share in whatever resulted.

The telegraph works by sending an electromagnetic signal over a wire. Morse had an idea that the current could be used to move a pencil along a moving strip of paper, but Vail simplified it by suggesting a cheaper and more practical alternative: an arm that would bounce up and down. The pair then had to devise a way to convert a tapping arm into a system of language. It was actually Vail, not Morse, who came up with the first dot-and-dash system, with each letter and number being made up of a different combination of long and short sounds or flashes. Vail’s first message using his code was, “A patient waiter is no loser.” But Morse was the better known of the two inventors, and it was his name on the patents, and that’s why we call it “Morse Code” and not “Vail Code.” -From Garrison Keillor’s The Writer’s Almanac, June 20, 2020.