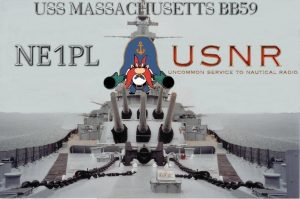 The [Uncommon Service to Naval Radio] Group, NE1PL, will be operating today on the USS Massachusetts–two HF stations and one 2-meter station on the Massasoit Amateur Radio Association’s  repeater, 147.180, PL 67, from 1000-1600. Come on the air and give us a shout.

[Located in Battleship Cove in Fall River, the USS Massachusetts (BB-59), known as “Big Mamie” to her crew members during World War II, was a battleship of the second South Dakota class. She was the seventh ship of the United States Navy to be named in honor of the sixth state, and one of two ships of her class (along with her sister Alabama) to be donated for use as a museum ship. Massachusetts has the distinction of having fired the US Navy’s first and last 16-inch (406 mm) shells of the war. -ed.]