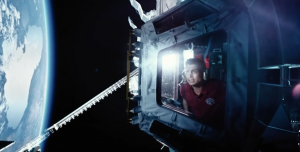 Most of you will remember SuitSat. In 2006, the ARISS team managed to acquire a Russian spacesuit with an expired expiration date that would have just been thrown overboard to burn up. ARISS designed and built an antenna and radio gear that was approved for installation into the suit and the whole shebang got deployed by a cosmonaut and Commander Bill McArthur, KC5ACR at the start of a spacewalk.
It transmitted a lot during its short life. After the ARISS engineers figured SuitSat-1’s orbit and spin characteristics, they knew the legs and arms would have to be filled with something, so they asked the crew to stuff dirty laundry inside. That’s just what they did.
Here’s a small part of what Rick Lindquist’s ARRL story said about SuitSat-1  (http://www.arrl.org/arrlletter?issue=2006-02-03):

“The Amateur Radio community, students, scanner enthusiasts, space fans and others have been eagerly awaiting the launch of the most novel satellite ever to orbit Earth. SuitSat-1 will transmit its voice message “This is SuitSat-1 RS0RS!” in several languages plus telemetry and an SSTV image on an eight-minute cycle as it orbits Earth. The three batteries powering the satellite are expected to last about a week, and SuitSat-1 should re-enter Earth’s atmosphere after several weeks of circling the globe. and  SuitSat-1 has piqued the imagination of the news media over the past couple of weeks. In addition to articles in The New York Times, the Houston Chronicle and Associated Press, National Public Radio, Fox News, CNN, Readers Digest, the Canadian Broadcasting Corporation, MSNBC and others also produced broadcast or cable news reports. A magazine article is set to appear in Aviation Week and Space Technology.”

Well, SuitSat is back! It’s featured in an eerie, six-minute sci-fi short, “Decommissioned.” The  video can be viewed at