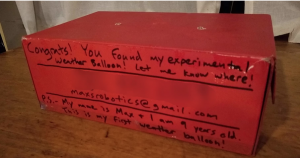 Ten-year-old amateur radio operator Max Kendall is having a blast with his latest weather balloon project. The Medway youth has been constructing a balloon payload around a Raspberry Pi computer and camera. The microcomputer he’s programming will collect atmospheric data, and convert the temperature values to the Fahrenheit scale “because I have a better feel for Fahrenheit than Celsius.”

A fourth-grader at the Benjamin Franklin Classical Charter Public School in Franklin, Max spends many hours of his free time preparing for a spring launch of his very own weather balloon. He launched his first weather balloon from a field in Agawam, predicting it would eventually land many miles to the east in or near Halifax. After a few unsuccessful attempts to get the balloon airborne using party balloon helium purchased at Target, the apparatus went aloft but soon afterward, the tracker stopped sending signals. Max suspects it went too far out of his limited range  or “may have frozen as it drifted higher” despite the disposable hand warmer he placed in the box with it.
Max has founded the Medway Balloon Society, a club for youths and families who meet online and “share messages, files, chats, text messages and voice and video calls.” When the club has enough local members, he plans to hold in-person meetings and launches. Max’s mother, Jennifer Kendall, says Max is working with the Medway Public Library’s Makerspace coordinator, Diane Busa, to find interested individuals and families to participate.
“He would just love to have more people in the area to collaborate with him on weather balloons.” She adds, “there is just so much to love about them–the engineering and coding needed in building them, the thrill of the launch, and the adrenaline rushing when you attempt to recover them after the launch.”
In hopes of avoiding the same loss of contact with his second balloon that he experienced with his first,  Max studied online and earned an FCC General class amateur radio license.  His callsign is WØMXX. With his amateur radio privileges he hopes to track his second balloon and retrieve its data and images via ham radio. He’s currently studying to earn his Amateur Extra license.

Max is focusing on his next weather balloon. He thinks it will be ready for launch later this month, or in April.