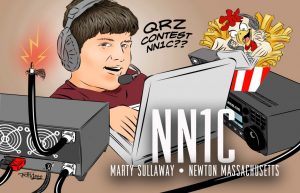 The presentation is an introduction to contesting, a discussion of serious competition, including the world radiosport team championship, contest DXpeditioning, and some highlights of nearby contest stations. We’ll cover everything from what to do to get involved, to a fun drone video of some of the largest stations in the world, and audio recordings of the highest level of competition.

Marty Sullaway is a 19-year-old radio aficionado living in Eastern Massachusetts. A lover of all things technical, his time in amateur radio has been spent designing and selling station automation hardware, teaching licensing classes, and pushing the limits in remote contesting. Marty has been extremely fortunate to have had the opportunity to pilot many larger contest stations, both as a single operator and as part of multi-operator teams. Marty will be a competitor at the World Radiosport Team Championship in Italy in 2022, and frequently operates from the Cayman Islands where he is a partner in maintaining a contest station there. Marty is a frequent digital content producer in amateur radio, acting as a frequent amateur radio club speaker, podcast guest, and has been published in The National Contest Journal as well as CQ Magazine, and various other media channels. Marty is currently a student at Northeastern University in Boston, Massachusetts, where he is pursuing a BS in Electrical and Computer Engineering, and works in mmWave radar systems and image processing.