As I write this article we are going through our third storm in just a couple of weeks. Hull is again without power and I am running on the Honda 2000EUi generator that I purchased a few months ago for events like this.

The main focus of getting back in to radio has been learning and preparing to be ready for emergencies. That includes either hitting the road with a go-kit or getting my home station set up to handle relay operation from home. While we have not had a real-life ARES callup in many years, these past couple of weeks to me have been a real-life test of the training and preparation I have put in to emergency communications over the past several years.

I’ve written about the go-boxes I have built for on the road work but I have also put in a great deal of work in to my home station. My home station has evolved over the years with the goal of having multiple redundancies built in. For power my station can be run off of a beefed-up UPS, or a deep-cycle marine battery, or a generator, or a combination of these. These redundancies have now been storm tested and have worked out very well. Hull was without power for 51 hours last week not including the current power outage. The generator I bought has already paid for itself. I have not missed a single traffic net during this period. 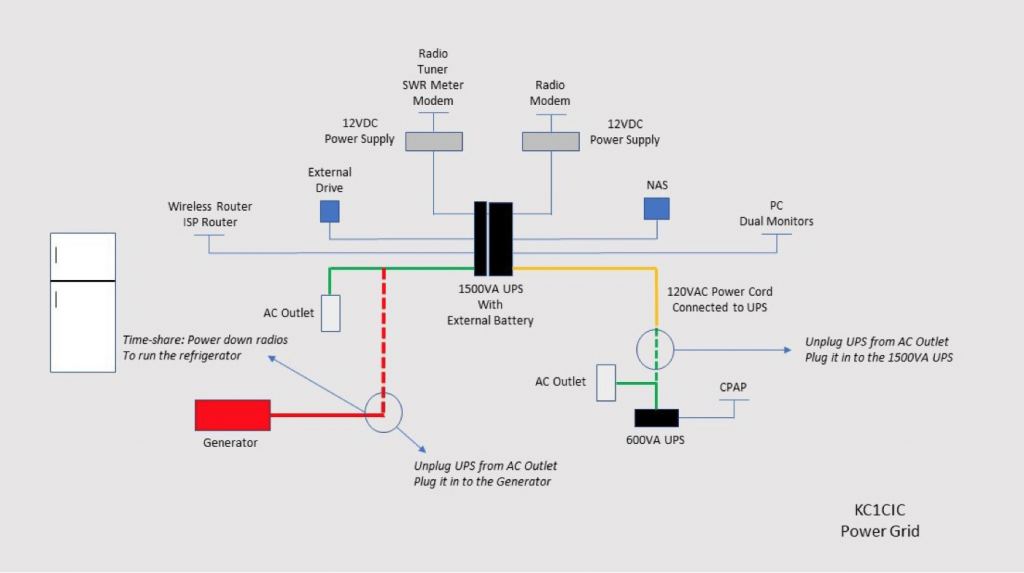 Anyone who knows me knows I am a huge fan of the National Traffic System (NTS). It always cracks me up when people say it is outdated.  Nothing could be further  from  the truth! I  operate daily  using  a variety  of modes on different nets. Participating in the NTS directed nets has been one of the best ways for me to train and gain valuable experience that can be applied to net operations in an emergency. In any given day I may pass traffic via VHF voice or VHF digital packet, HF voice, CW, or Pactor digital communications. There are often times when I use all of these modes in a single day! Whatever it takes to get the message through.

One of the reasons working with NTS is important to me is because I work and learn from some very talented people. Working within a directed net (controlled by the NCS) and passing traffic effectively and efficiently takes practice, practice, practice. As NTS operates daily throughout the year the opportunity for practice is always there.

Taking the step up to become an NCS on a directed traffic net is an experience. You learn, fail, learn, fail, and over time get better at it. People on the NTS nets are always there to support you and tell you how to do it right or better. Over time I’ve learned to deal with a lot of unexpected issues in the various modes used to pass traffic. The easiest example to give to you is when repeaters and stations have problems communicating because of storms.

We run the 8:00 PM traffic net on the [Boston Amateur Radio Club] repeater. As a result of the recent storms, home stations and repeaters have had issues. On the BARC repeater the other night it was very difficult to pass traffic because of the bad signals. As the NCS I sent two stations to the Sharon repeater because I knew they could both communicate on it (that comes from experience). When they were done they came back to the BARC repeater. I sent another two stations to the Whitman repeater for the same reason. In the meantime, traffic was being passed on the BARC repeater as well. These are the kind of situations that take place on emergency nets and situations that you would be expected to be capable of handling.

In CW (Morse code) traffic nets the same thing happens. The NCS may send you up or down a few KHz to pass traffic and then come back. In all modes you deal with interference that requires skill and knowledge to get the message through.

As an NCS I am skilled, trained, and experienced in a lot of traffic handling situations. However, the nets could not be as flexible and successful as they are if the individual stations themselves were also not practiced at directed net operations. It’s a team effort by all involved that makes it work because we all have the experience as a result of how often we operate. During the recent storms we passed many dozen pieces of traffic as a result of the training and practice. Had this been an emergency net life would have been pretty good!

Today was an example of VHF digital packet not working well, which it normally does. It was also an example of working the “problem” to get a message through. Scott, KO4W was trying to relay packet traffic via the Brockton digipeater to the KW1U BBS. Due to the storm Brockton and KW1U could not “hear” each other well enough to pass traffic. To get around that, Scott who was in Scituate sent his messages via VHF packet directly to my BBS in Hull. Because I too could not connect to the KW1U BBS, I used HF Pactor to relay his messages to the KW1U BBS. When it came time for the reply, we did the same thing in reverse. We did this as a team, in the middle of the storm, on generator power, in under 30 minutes.

It wasn’t a big deal for us because it was a situation we had tried out before. What if I try this, what if I try that? Having the opportunity to gain experience and knowledge ahead of an emergency is priceless. This was all done during the power outage as well.

My point here is not to push NTS on anyone but rather to push training and especially experience on you. While none of the traffic passed during these three storms was of any critical importance, it was a chance to test personal training, experience and capabilities in less than ideal conditions. Because NTS operates daily, the opportunity to hone your net skills is always available.

Reading books and being an ARES member is great. Being experienced with net operations greatly benefits your service to ARES and other organizations. Are you experienced and ready if the call comes? There is a lot you can do to be ready, and many opportunities to gain experience for the times when you really need it.

Well, power just came back on! Time to switch power. I do love electricity!