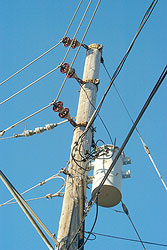 Several clubs in Eastern Massachusetts have been acknowledged for their contributions via the League’s Sectrum Defense “Honor Roll” in the recent November, 2003 QST. The defense includes “special campaigns for WRC-03 and against Broadband over Power Lines (BPL).”

The Falmouth Amateur Radio Association contributed funding for the cause after they were “treated to a ‘horror movie’—a video of ARRL tests run in various BPL trial areas which clearly demonstrated the dreadful, debilitating inferference caused by BPL,” according to Falmouth club president Bob Courtemanche, N1WAT.

The Billerica Amateur Radio Society, at a recent Board of Director’s meeting voted “to appropriate $100 to be donated to the ARRL Spectrum Defense Fund for BPL legal activities. The motion was seconded and unanimously approved.”

The HP/Agilent/Philips ARC (with a local club chapter in Andover, MA) was also acknowledged on the Spectrum Defense Honor Roll.

These clubs join thousands of individual ARRL members who have contributed monies for spectrum protection efforts.