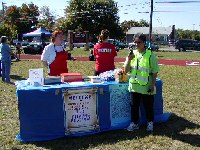 The Kids Fitness Festival featured various fitness and mental challenges, including: karate, yoga, dance, “Build a Veggie Race Car”, and obstacle courses. It attracted hundreds of citizens, young and old, from Whitman and Hanson. It was presented by the Whitman Hanson Education Foundation, Inc. and sponsored by the Rockland Hanson Rotary Club.