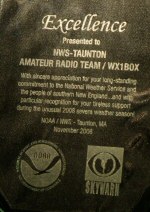 Members of the Taunton SKYWARN ARC Team received an Excellence Award from the meteorologists at the Taunton National Weather Service office on November 15, 2008.

The award was presented to the group by NWS Taunton forecasters Bob Thompson, Glenn Field, Bill Babcock and Eleanor Vallier-Talbot.

“Today was a special meeting,” remarked ARES SKYWARN Coordinator Rob Macedo, KD1CY. “I wasn’t expecting the trophy that’s sitting on top of the power supply here at the station. I was surprised. Very well done, I must say.”

The award meant even more to the amateur radio team since it was funded not by NOAA but rather, by the forecasters at the station who paid for it out of their own pockets. 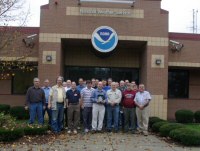 The award reads: “Presented to NWS-TAUNTON AMATEUR RADIO TEAM / WX1BOX With Sincere appreciation for your long-standing commitment to the National Weather Service and the people of southern New England… and with particular recognition for your tireless support during the unusual 2008 severe weather season.