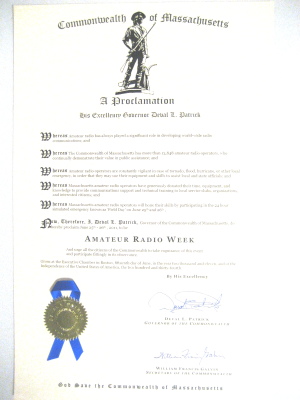 Just in time for Field Day–Massachusetts Governor Deval L. Patrick has declared June 25-26, 2011 to be “Amateur Radio Week” in Massachusetts.

The Proclamation was signed at the Executive Chamber in Boston on June 15. The official document was awarded on June 21 to ARRL Eastern Massachusetts Section Manager Phil Temples, K9HI who met wtih Bianca Hoffman in the Governor’s Office on Beacon Hill. Last year’s proclamation was secured through the diligent efforts of the Hampden County Radio Association in Western Massachusetts. (See <http://ema.arrl.org/node/1712

Several individuals worked to secure this year’s proclamation, according to Temples. “I want to acknowledge the work of our State Government Liaison, K3HI, along with effort by several club presidents–and in particular, one of our Local Government Liaisons, Hank McCarl, W4RIG of Gloucester,” remarked Temples. “Hank set up conversations with the office of the Senate Minority Leader–who is, coincidentally, a licensed amateur, and a member of the Cape Ann Amateur Radio Association.” Temples added, “We hope also to secure a Senate Resolution honoring Amateur Radio before the start of Field Day.”

K9HI plans to tour with the official Proclamation throughout Eastern Massachusetts during the Field Day weekend.