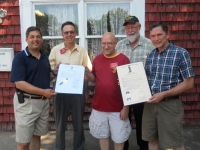 The Cape Ann Amateur Radio Association hosted Massachusetts State Senator Bruce Tarr, N1UIU along with Eastern MA ARRL leaders at its club house in Gloucester on Sunday, July 17. Tarr brought along the original Senate-House Resolution proclaiming Amateur Radio Week in Massachusetts. His office was instrumental in helping the Eastern MA ARRL field organization to secure both the legislative resolution as well as a gubernatorial proclamation.

Sen. Tarr described the steps involved in creating the resolution and its impact–particularly, how it underscores the work of amateur radio operators in the Commonwealth. He praised CAARA and its members for their dedication to public service, as well as acknowledging the club’s ARRL Special Service Club status.