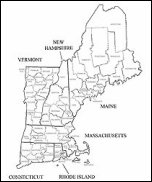 The New England QSO Party is coming in just one month – the weekend of May 5-6 – and we’d sure appreciate it if you would spread the word within your club through your newsletter or at the next meeting and help us to encourage activity from Eastern Massachusetts. Last year we had 222 different stations from all Eastern Massachusetts counties on the air, and we’d like to have more activity this year.

The NEQP is a great way to test your antennas on 80-10 meters and to be the focus of a lot of activity as stations from around the world look for Eastern Massachusetts stations.

Here is a summary of the New England QSO Party rules:

Scoring: Total score is QSO points times the multiplier. Mobiles count QSO points per county and multipliers from all counties (counted once).

Reporting: Logs should indicate times in UTC, bands, modes, calls and required contest exchange. All stations include your club’s name in the log header or summary. Entries must be submitted within 30 days and sent to NEQP, P.O.Box J, West Suffield CT 06093 or via e-mail to logs@neqp.org (Cabrillo format preferred).

Awards: Certificates will be awarded to the top scorers (25 QSO minimum) in each New England county, U.S. state, Canadian province and DXCC country. A number of special plaques will also be awarded to top scorers.

Additional details can be found on the NEQP web site at http://www.neqp.org

See if you can have a competition within your club for the top scorer. Several Massachusetts clubs are challenging each other for the best club score.

We’re especially looking for mobile stations to put the rarest counties on the air. In Eastern Massachusetts, that’s Suffolk and Nantucket.

If you think you might be on for at least a short time in the NEQP, let us know with a brief message to us at info@neqp.org