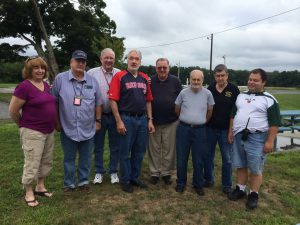 The rain held off, at least until 3 PM and the cloud cover kept the temperatures comfortable as a good group enjoyed good food and good conversation at the 2014 Traffic Handlers picnic at the Senior Center in Raynham MA Sunday August 3. The day was only dampened by the news that one of our most regular attendees was and will be greatly missed as we learned that Byron, K1YCQ became a Silent Key. A moment of silence was held in honor of Byron.

Those present included KW1U, N1OTC, N1TF, KB1WXC, W1HL, WA1LPM, N1LKJ, N1UMJ, N1IQI, N1WCO, K9HI, KA1OCF, KB1ZWZ plus a few harmonics. We were sorry to miss Dan, KC1AXR who arrived shortly after we had all left due to the arrival of raindrops. I want to especially thank Jim, N1LKJ for obtaining permission to use this fine facility, and Jack N1OTC who was again the master grill chef and did a superb job. Thanks also to all the others who brought all kinds of goodies. Jack was also the winner of the drawing for the new Amateur Radio Handbook, and Bob, N1SYC won the new Public Service Handbook, both donated by our Section Manager Phil, K9HI. Many thanks to Phil. Those of you who were unable to attend missed a good time. We hope to see you next year.