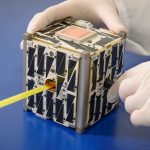 From Slate.com: “In January a Silicon Valley–based commercial space startup named Swarm Technologies launched four experimental satellites into orbit aboard an Indian Polar Satellite Launch Vehicle rocket… There’s just one problem: It appears Swarm launched the SpaceBEEs without an experimental authorization from the Federal Communications Commission, something that should have been acquired before launching.”