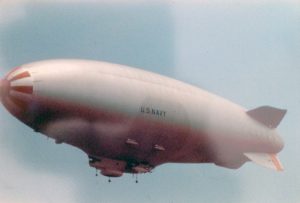 The Shea Naval Air Museum Amateur Radio Club (W1NAS) will commemorate the 60th anniversary of the flight of the blimp Snow Goose with a special event operation on Saturday, August 18, 2018, from 0900-1500 EDT.  They will operate on 14.250 and 7.250, but may change depending on band conditions.  The Snow Goose flew from NAS South Weymouth to Resolute Bay while the submarine USS Nautilus cruised under the polar ice cap.

The Shea Naval Aviation Museum was formed by veterans who were stationed at the former South Weymouth Naval Air Station.  The Shea Naval Aviation Museum Amateur Radio Club was born of out joint participation between the Museum and the K1USN Radio Club.  Its first club license was obtained in March, 2015, and the current call, W1NAS, was assigned on April 10, 2015.  The call sign “represents the use of the facility for more than 55 years as a U.S. Naval Air Station, first as a blimp base, and later as the home of numerous fixed-wing and rotary-wing squadrons.”