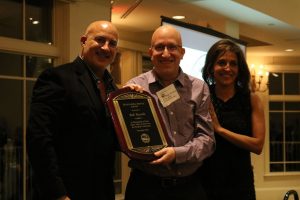 The Blue Hill Observatory awarded Rob Macedo, KD1CY, with their Outstanding Service Award on November 9, 2018. The award was presented at a Blue Hills Observatory fundraising event by meteorologist and Weather Channel personality Jim Cantore and former Weather Channel meteorologist Mish Michaels. The honor was especially meaningful for Macedo as it coincided with his birthday.

“It’s both rewarding and humbling to receive [the award] in the presence of some of the most respected people in the meteorology profession,” remarked KD1CY. “It wouldn’t be possible without the support of hundreds to thousands of SKYWARN spotters and Amateur Radio operators who support the program and give their reports during times of severe weather…”