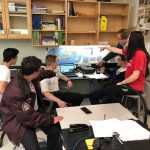 Founded in April of 2019, the Hudson High School Ham Radio Club went on the air with a new club station license as KC1LFV.  Within a few weeks, the FCC issued our new club vanity callsign: W1HUD.

Hudson High School is a public school enrolling about 950 students in grades 8 – 12.  It is located in the New England town of Hudson, MA, about 27 miles (43 km) west of Boston.  We offer a broad general education curriculum, including about 155 elective courses to meet widely varying student interests.  Included among these are courses in digital electronics, robotics, and an advanced AP Physics course in calculus-based electricity and magnetism.

Unlike in years past, most teens today have never even heard of amateur radio, let alone seen a ham station in operation. The HHS Ham Radio Club was formed to address this gap in knowledge, and hopefully to inspire young people to become interested in amateur radio.

The first “shack” for W1HUD is located right inside the Honors and AP Physics classroom/lab at the high school, where students can try their hand at listening and operating under the close supervision and operational control of the club’s founding trustee Reed Prior (W1TF), who is a physics and astronomy teacher at the school.

The club currently is using a borrowed Kenwood TS-590S transceiver feeding a donated 18 ft tall Hy-Gain 5-band vertical antenna mounted on the building roof.  The roof is made of membrane coated steel, so it provides an excellent counterpoise.

Most operations since inception have been on FT-8 digital using WSJT-X software running on a loaned teacher’s laptop.  Operating in digital mode has proved especially appealing to the students in our situation, since:

1)  Digital operations are “quiet in the shack” (with the burbling tones turned down on the AF control), so students and the controlling operator can operate the station while other classes are running in the same room.

2)  Young people these days are . . . well . . . shy about speaking live with strangers.  They’ve grown up in an SMS texting world, where even dating is often done as much by texting each other as by interacting in person!  They seem naturally fascinated by the power of digital communications sans the internet infrastructure.

3)  With the club’s modest “Little Pistol” station of just 100 watts feeding an omnidirectional vertical antenna, students are amazed by the range of DX stations they can reach this way, even during the day.  Strong signal reports from 10,000 miles away in Australia come to us on 40m and 30m almost every morning.