Hello to all other FISTS Club stations!

As stated before, the USS Salem Radio Club – K1USN (FISTS # 9239) plans to be active all day on Sunday September 14th from onboard the USS Salem. We are planning to operate several stations and will be using a variety of straight keys, paddles and bugs during the day. We intend to also fire up some of the USS Salem vintage radio gear on 7058 (±)! We hope to have lots of members participate onboard.We are hoping to have some good participation from other Clubs as well. We are fortunate to have K1VV – Whitey as one of our USS Salem members. He has recently been putting together some fantastic video CD and DVD presentations. He has done them for the Marconi 100th Anniversary event ( KM1CC ), New England Steam and Wireless Museum ( Rhode Island ), W1NZR Field Day ( Ft. Burnside, RI ) and has just completed a presentation about the recent International Lighthouse Weekend activities at N1P ( Ned’s Point ) and N1L ( Boston ) Lighthouses.

These are SUPER for promoting Ham Radio to the general public as well as for presentations at Club meetings. He is now working on a video presentation focusing on FISTS and the C2C weekend! He will be onboard the USS Salem taking photos and conducting interviews. He has requested that all of the participating FISTS Club stations send him two photos ( only two because his dial-up server will be swamped! ) accompanied by the names/callsigns of those in the photos. You could also send a brief summary of comments and highlights from your operation. Whitey’s e-mail address is k1vv@tmlp.com

If you have anything additional to send such as more photos, etc. please send them via snail mail to his Callbook address.

The final product video CD should be something that will be a useful and valuable resource for FISTS. I’ve already spoken with Nancy-WZ8C and she will get the first copy. We discussed having her get someone from FISTS to work with her to make additional copies to distribute to FISTS Clubs and individual members. This FISTS Promotional video can be distributed freely and copied by FISTS members making sure to give artistic credit to K1VV!

In light of the recent WARC regulation changes regarding elimination of the Morse requirement; we FISTS members need to do our part to find a new way to attract people to WANT to use CW and carry on the legacy.

The EMA FD Homepage now has the staff/leadership tour list and map. Our Tourists were, in rough rank of mileage,

Phil K9HI and Mike W1MPN carried the two copies of the Proclamation with them. Expect picture links to appear on EMA ARRL, ARES, and FD pages soon.

See the tour list and map for more details.

FRAMINGHAM —”Imagine that six meters is open and you have 100 watts and a beam at 125 feet to play with!”

“If that hypothetical from the Framingham Amateur Radio Association newsletter fails to excite you, or even make sense to you, you are not alone. FARA treasurer Peter Simpson, of Holliston, jokes that ham radio has always been something of a geek hobby, practiced by an enthusiastic few using a language of their own.” [y] Metro West Daily News 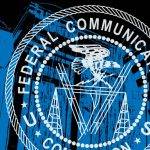 I am pleased to announce that Governor Mitt Romney has declared June 28, 2003 “Amateur Radio Day” in the Commonwealth of Massachusetts. Governor Romney granted the proclamation today, in recognition of the more than 13,000 Massachusetts “Communications Volunteers” that give of their time and expertise in disaster situations and during public service events, statewide. Phil Temples – K9HI, asked that we request this proclamation of the Governor to coincide with Field Day 2003, our annual emergency preparedness exercise. [Please see picture of EMa leadership and State RACES Radio Officer accepting proclamation at the EMa Section Website.

I’d like to thank Phil for his encouragement and advice, Mike Neilsen – W1MPN for his input and data, Shawn O’Donnell – K3HI for his experience with Government Relations and Tom Kinahan – N1CPE forproviding a means to get the information into the Governor’s Office. We’d also like to sincerely thank Peter Judge, M.E.M.A. Public Information Officer, for delivering the request and press releases to the State House and Senator Cheryl Jacques for helping to push this proclamation through the proper channels. Congratulations to all those Massachusetts “Hams” that have worked very hard to give us the reputation that made this proclamation a reality. Enjoy your Field Day with a deserved sense of accomplishment!

June 11, 2003 – Boston, MA – Governor Mitt Romney issued a proclamation declaring June 28, 2003, “Amateur Radio Day” this morning. The Governor made this proclamation in recognition of the more than 13,000 amateur radio operators in the Commonwealth. These volunteers play a valuable role in Emergency Communications, National Weather Service “Severe Weather” spotting and Public Service in the Commonwealth. They are involved with the Massachusetts Emergency Management Agency, several Massachusetts branches of the American Red Cross and other important served agencies.

Congratulations to all those Massachusetts “Hams” that have worked very hard to give us the reputation that made this proclamation a reality. Enjoy your Field Day with a deserved sense of accomplishment! We’d like to invite all the clubs in Massachusetts to celebrate this Proclamation and get the word out to the public about Amateur Radio. All our affiliated clubs are welcome to use the information in their Field Day press releases and any other PR efforts.

We would like to express our sincere thanks to Governor Romney and his staff for generating this proclamation and Senator Cheryl Jacques for assisting with getting the paperwork pushed through. We know that there are more than 13,000 amateur radio volunteers in this state and we’re certain they appreciate the recognition you’ve shown them. We would also like to thank Tom Kinahan and Peter Judge for their spirit of cooperation in assisting the ARRL Eastern Massachusetts Section staff with this very worthwhile project.

“Everyone can watch the NECN video on-line at:
http://necn.com/

At the bottom of the page, under

Real player is required for viewing. 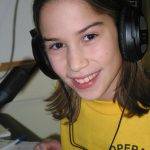 Photos taken from my visit to the Marconi Centennial Celebration / Special Events Operation KM1CC in Eastham, on January 12, 2003 are available for viewing.

We are up and running! We have 5 HF stations running with very little inter-station interference. We have been making a lot of changes on the fly. We are experiencing some problems with out networking and could use some help from a networking guru!

We could also use another LPT port keying interface.

The Atlantic On-line web site features a well-written article on volunteerism in the wake of 9/11 entitled, America’s Secret Weapon in the War on Terror: Americans. It specifically mentions the work of Amateurs and the ARRL. It’s great PR for the League, and for our hobby service!

Celebrating The 100th Anniversary of Guglielmo Marconi’s First Wireless transmission between the United States and Europe on January 11 – 19, 2003.

From atop high, sandy cliffs overlooking the Atlantic, Marconi transmitted a simple, 54-word greeting from President Theodore Roosevelt to Great Britain’s King Edward VII. Within hours, the King acknowledged receiving the message, and the spark of global communications was lit.
The Marconi Radio Club, W1AA, and the Marconi Cape Cod Memorial Radio Club, KM1CC, working in partnership with the National Park Service at Cape Cod National Seashore, will operate a Special Event station from January 11-19 at the former Coast Guard station at Coast Guard Beach in Eastham, Massachusetts, from near the site of the original Marconi 1903 Station. From 9:00 a.m. to 5:00 p.m. each day, the public will be able to tour the station, listen to voice and Morse Code discussions with other radio operators around the world, and learn about wireless technology and the significance of Marconi’s achievement. For Details See: http://personal.tmlp.com/k1vv/w1aa

January 18, 2003 will mark the centennial of Marconi’s groundbreaking transatlantic wireless transmission with a reenactment of this historic scientific achievement, rivaling the Wright Brother first flight at Kitty Hawk.

For a complete events calendar, go to www.nps.gov/caco and click on “In Depth,” then “News.”

Please consider getting involved in this worthwhile project.

“Time is short to have Santa talk to the sick kids this Christmas via amateur radio.

“Please look at the new, easy, revised information about how to do this—an amateur radio presence is not needed on-site and no transmissions need to be made in the hospital. The new information is seen in the “Holiday Hams” section of the www.hobbiesforhealing.com website.

“I want to expand this program before next Christmas—can you help me? My new email address is: ss011148@southeasttech.com Thanks very much.”

I am Trustee for the USS Salem Radio Club – K1USN in Quincy, Ma. This e-mail is being sent to as many Ham Clubs as possible from listings on the ARRL web site. We would like to try to enlist help from the Ham community with our efforts to encourage newcomers to our great hobby.

During the past year, we have hosted 6150 Scouts as part of our onboard Overnight Scouting Program. These Scouts have come from throughout the entire New England area plus NY, NJ and PA. We even hosted 14 Scouts from the UK back in January! Part of their 24 hours onboard the USS Salem is spent being introduced to Ham Radio and Morse Code. We have two complete HF stations and a VHF/UHF station in Radio Room 5 which are part of our demonstrations onboard. Most Scouts have an opportunity to make a contact on the air and have often gotten to speak with our good friend KE6ZYK – Mike at Mc Murdo Station, Antarctica! The Scouts also receive K1USN QSL cards, Official Radioman wallet cards, ARRL literature including QST magazines and most importantly- AN INTEREST IN AMATEUR RADIO!!

We need your assistance to help us transform these 6000 + “Sales Leads” into prospective Hams! We need to compile an accurate list of Clubs throughout this area that would be willing to give additional onsite demonstrations and offer License Classes.

Please feel free to pass this e-mail along to people from any other Ham Clubs throughout the Northeast that might be willing to assist these youngsters . Remember- The future of Amateur Radio is in the hands of EVERY Ham!

The Massasoit Amateur Radio Association was recognized by the Bridgewater Town of Selectman in a special proclamation on March 20.  Noting the club’s “technical and communications expertise” to the emergency management department, police, and fire departments, they declared March 20, 2001 as “MARA Day.” 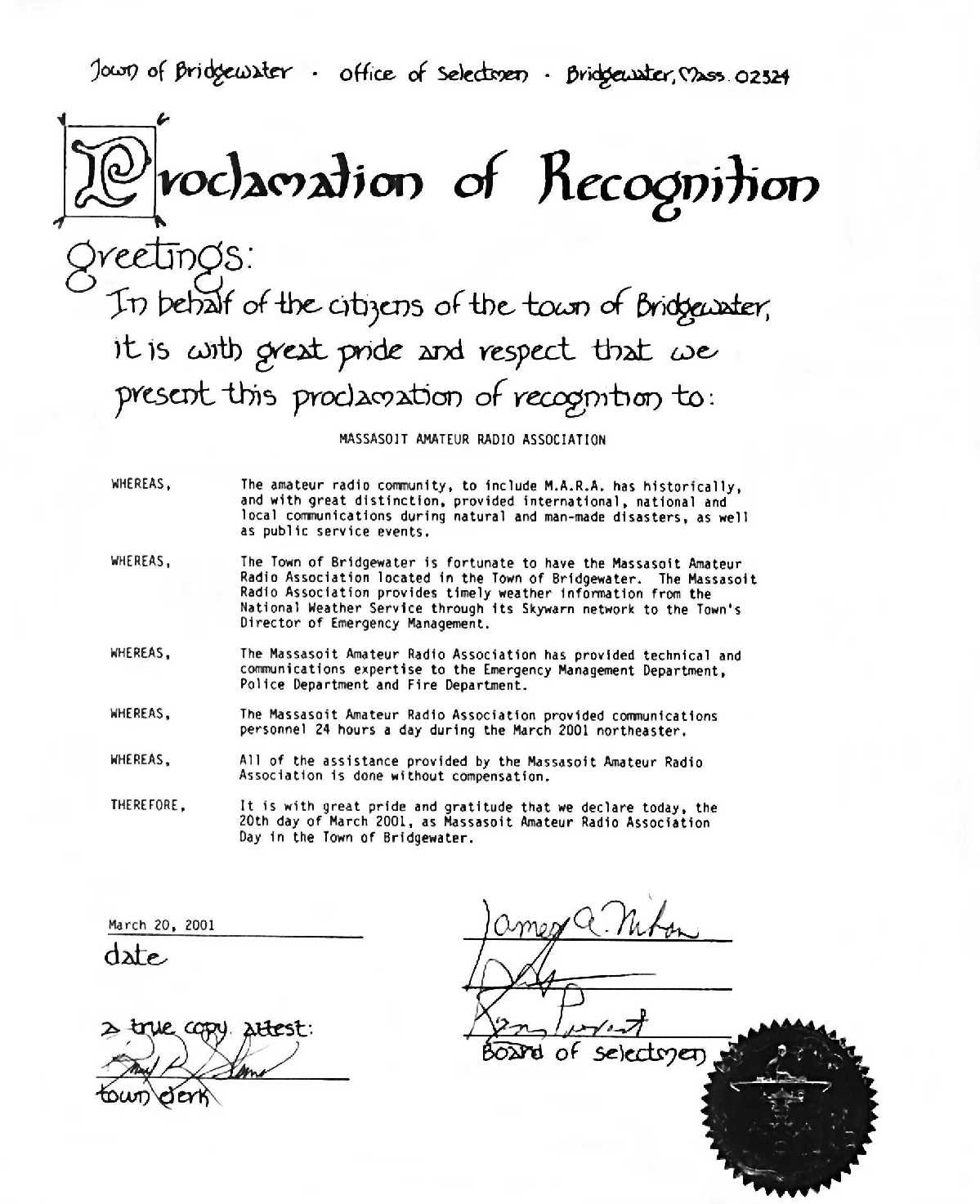